Texas Lodge no.46 was opened at 10:00AM on the 2nd degree of Freemasonry, for the purpose of Examination, later to be called down to the first degree, for the conducting of regular business.

Proficiency in the 2nd Degree

Upon opening of the Lodge, Brother Charles Beylacq recapitulated a nearly perfect Fellowcraft Proficiency. A standing ovation rang out after his masterpiece of memory work was completed. Being that he has been waiting so long to deliver this proficiency, we wanted it to get it out of the way as the first order of business.

Lodge Called Down:  At 10:29am the lodge was called to refreshment and then came to order on the first degree of masonry, two entered apprentices closed their ciphers, ended their study session and joined the Lodge of Entered Apprentice Masons, for the transaction of business.

Reading of the Minutes:

The first order of  business, that of the reading of  meeting minutes from the April 9th meeting were read, and accepted.

The Lodge Audit committee reported that the Lodge & Hall Audit were partially complete, having run out of time in the preceding meeting, despite beginning at 8:00am. The Hall audit was completed and “all is right”. The Lodge audit will continue after the stated meeting.

An application was received from a Mr. Jerrold Johnstone of Los Gatos. He is the owner of Corporate Printing Resource Inc. having been in this business since 1997. There were no objections to the submission of this application for degrees, and thus an investigation will be undertaken by the Grand Lodge, as well as appointed Master Masons from our Lodge.

Reimburse Wardens Retreat Costs: The lodge received an invoice for reimbursement, from Kevin Herrick for his expenses related to the 2022 Warden’s retreat in the amount of $959.69 to be paid with check #2111 following approval by the lodge, which was offered.

Treasurer Report: The checking account stands with a balance of $32,798. Additional details were offered, as stated in the report itself which offers great detail. Wor. David Dreisbach made a motion to accept the report, and it was seconded by Wor. Robert Robbins. Also included in the report was the issue of two checks that were noted by Grand Lodge as never having been cached. The items were 2 checks for the same amount of $19.80, likely fuel reimbursements for travel to the Annual Communication of 2018. It was decided to ask the Grand Lodge to re-issue the checks, and be sure they have our proper mailing address.

Donation to Building Fund: The Treasurer also wanted to be sure that recognition was offered to Brother Jack Swallow, for his generous donation of $500.00 to the building fund. He expressed his gratitude for the many Brethren that came to his aid, when he was moving. Brothers came to support, offering their hands, trucks and equipment to move important items from his old household, to his new one. He wanted to thank the Brethren for their Brotherly love and support, and could not think of a better way than to donate to our esteemed Lodge, that house made with hands, and continually invested in. 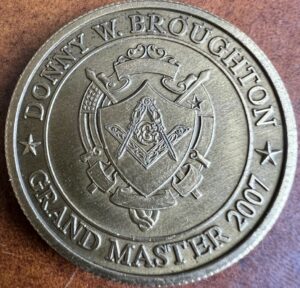 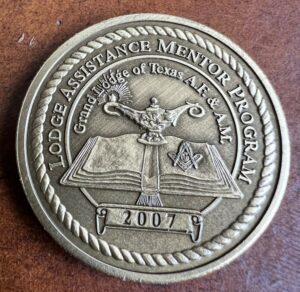 A metallic deposit:  The Worshipful Brother Robert Robbins offered to deposit a metallic challenge coin with the Secretary, not for its intrinsic value, but that he was searching on eBay, and ran across this coin memorializing the Lodge Assistance Mentor Program from the Grand Lodge of Texas. It displays the Grand Masters name and the date 2007.

With this recent donation, the Secretary asked that a motion be considered by the Lodge, to fund a display case costing up to $100, to be procured or made by the Lodge so that we might bring into the light, these artifacts which we have been collecting throughout the years and display them on the wall for all to enjoy. The Lodge approved the motion, and a committee of Brothers Baylacq, Robbins, Swallow and McKechnie was established to perform said task.

DeMolay Letter Received:  A thank you letter was received from the Order of DeMolay, as you know, they are a Masonic organization for the development of young men aged 12-21. They expressed their gratitude for our $150 donation, which was sent back in November. While our particular lodge does not have a chapter, it is now, more so important, than ever, that young men in this country and across the world are educated as they travel along that path to become men.

The Brethren were informed of the Masons4Mitts program, and directed to donate if able, and explore the possibility of attending the Northern California Game, which is the Giants against the Milwaukee Brewers on September 25th.

The Brethren were also informed of the new “Opening the Door” brochure, which was recently published by the Grand Lodge. I let the Brethren know, it is available on our website in a separate post, and that print copies are forthcoming.

The Lodge was called up to the Fellowcraft Degree, and subsequently closed at 11:30am, in due form.

“Our Deportment,” a code of manners for refined society by John H. Young A.M.,1881

In society, everybody should receive equal attention, the young as well as the old. A high authority says, “If we wish our young people to grow up self-possessed and at ease, we must early train them in those graces by giving them the same attention and consideration we do those of mature years. If we […]

Every now and again I run across something that might be useful to Brethren. This YouTube channel named “oversimplified” is such a gem. It quickly and succinctly summarizes historical events so that they are easily accessible in short and humerous videos. Enjoy! Sincerely, Loren McKechnie Secretary, Texas Lodge no.46 of F.&A.M. of Calfornia

A Masonic Lodge on the Moon?

In September, NBC’s streaming service, Peacock, debuted a new television adaptation of Dan Brown’s The Lost Symbol which touched off a sudden explosion of interest in Freemasonry and provided a mysterious backdrop to the plot of the story.

In this special issue of California Freemason Magazine, we delve into the unique power of music—the power to heighten the ritual, to find and make meaning, and to bring people together.

As master of his not-so-nearby lodge, Barstow Boron Lodge 682, Miguel Vazquez makes the long trip into the Inland Empire numerous times each week to sit in the East. Still, you won’t hear him complain. Neither will the other 122 members of the Masonic lodge.