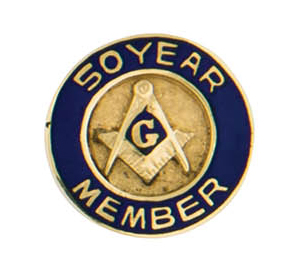 It is with great pleasure that the Brothers of Texas Lodge on behalf of the Grand Lodge of California presented the Golden Veteran Award of Masonry to our Brother Richard M. Fisher. He was raised to the sublime degree of  a Master Mason on March 13th 1969 some 52 years ago in Stockton CA, at the Morning Star Lodge no.68

Brother Fisher earned this award 2 years ago, but due to the pandemic the Lodge has officially been at refreshment, in terms of “in person” meetings. The brothers of this lodge note that Brother Fisher Affiliated with our historic lodge in 2010, and served as secretary for multiple terms.

Many Brothers family and friends accompanied Brother Fisher on this momentous day.

The following visiting brethren held positions opening the Lodge, and in the ceremony.

The other officers stations were filled with Brethren, as noted in the Tyler’s register.

Brother Fishers daughter Carolyn pinned the beautiful blue and gold pin on his lapel, and the Master presented him the framed award document. He then made a wonderful speech about his ongoing journey as a man and a Freemason.

The meeting was ended at 10:57AM and a congratulations procession was conducted on the way to a hearty Texas Lodge BBQ.

It’s 2022! We welcome a new year and all the hope and opportunity that it brings to us, our families, and the Fraternity.  I hope you all had a joyful and blessed holiday and are ready for a busy and exciting start to the New Year. January will be the Installation of the newly elected […]

Brethren, Our Brother Jake Miranti, traveling from Texas proper, stationed here at Monterey offered a wonderful presentation over breakfast, recounting the history of Masonry in the great state of Texas. Lodge was opened on the 1st degree of Freemasonry to the 863rd page of the Holy Scripture, on the 13th of November 2021, at 10:23AM […]

The Brothers of Texas Lodge gathered on Saturday October 30th, 2021, to confer the Fellowcraft Degree upon their Masonic Brother Charles E. Baylacq.  The Lodge was opened at 10:20AM upon page 765 of our historic Bible. There is not much we can share about the beauty and meaning of this sacred degree, but it is […]

The Stated Meeting of October, was held on the 2nd day of the Month, by special dispensation, due to the Grand Lodge Annual Communication of 2021. Details of which will be addressed below. Lodge was opened on the First Degree, at 10:11AM and The Master lead the brethren in the pledge of allegiance to the flag, […]

A special meeting was held on the 18th of September at 6:30pm for the presentation of the Hiram Award to our esteemed secretary Brother Loren George McKechnie. It was preceded by a Texas BBQ to remember. Fraternity and Brotherly Love was evident throughout the Parlor, Kitchen, Dining Hall and the BBQ pit in the back […]

The Stated Meeting of September, was held on the 20th Anniversary of the Terrorist Attack on New York and the Pentagon. The master called for a minute of silence to remember how all Americans have been affected by the awful attack, especially all of our br avest first responders, the men and women who run […]

Please explore the oldest Freemason Document, Video below. The oldest, the Regius poem, is unique in being set in verse. The rest, of which over a hundred survive, usually have a three part construction. They start with a prayer, invocation of God, or a general declaration, followed by a description of the Seven Liberal Arts (logic, grammar, […]

The Stated Meeting of August, was held in person. It was the second stated meeting in person since February 2020, due to the COVID-19 shut down of services by the Governor, who may be recalled in a special election held by mail, in September. The Lodge was opened at 10:20AM after a hearty breakfast enjoyed […]

The Stated Meeting of July, was held in person. It was the first stated meeting in person since February 2020, due to the COVID-19 shut down of services by the Governor. The Lodge was opened at 10:41AM after a hearty breakfast was enjoyed by all. The Master lead the brethren in the pledge of allegiance […]

The Stated Meeting of June, was held via Zoom with a few fully vaccinated brothers attending  at the Lodge, on Saturday the 12th of June. With all Brethren in attendance confirmed to be Masons, fully vaccinated or tested to be Covid-19 free, the Lodge was opened at 10:01AM. The Master lead the brethren in the […]

What is the Hiram Award?

The Hiram Award The Hiram award is the single highest honor a Mason in California may receive, if so elected by committee. It is awarded by the Grand Lodge of the Masonic Jurisdiction, and presented by the regional inspector. Each Lodge of Free and Accepted Masons has the ability to award this lifetime achievement award […]

The Stated Meeting of May, was held via Zoom with a few fully vaccinated Brothers attending  at the Lodge, on Saturday the 8th at 10:00AM. With all Brethren in attendance confirmed to be Masons, and Covid-19 free, the Lodge was opened at 10:05AM. The Master lead the brethren in the pledge of allegiance to the […]