** He has lived! The fruits of his labors live after him **

Like many of you, I watched the news last night as a mob pulled down and burned the statute of Albert Pike. Earlier in the day I gave a TV interview in which I said that Freemasons did not want the statue to be a point of conflict, but that it was property of the United States, under the Parks Service. I preferred that it be moved to a museum where he could be understood in context.

Last night, as the mob did their work, the news media called it a “Confederate Statue,” the presence of which was “painful.” In truth the statue had nothing to do with the Civil War. It was Pike as a Freemason, in civilian clothing, holding a copy of Morals and Dogma. 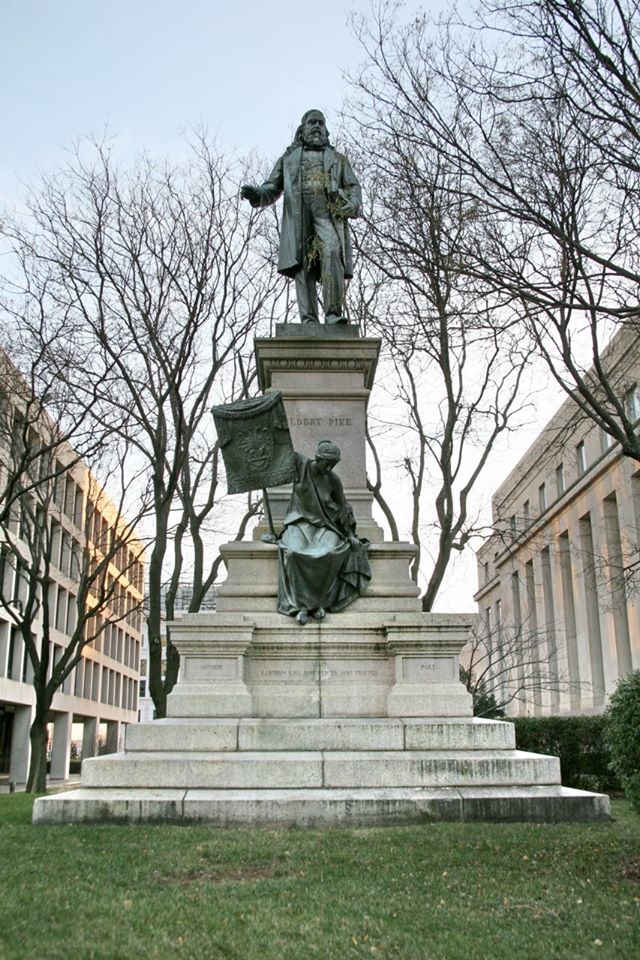 Pike was a man of his times who embodied the strengths and weaknesses of his generation. Freemasons acknowledge Pike’s personal foibles and frailties and revere his ethical and moral teachings. They respect what he accomplished, and see in him an example of a person who was willing to abandon personal prejudices on the path to self-improvement.

Among his strong points was his pursuit of knowledge and self-improvement. Within one lifetime he seems to have lived multiple lives that sometimes overlapped each other. He was, for example, an advocate for Native American rights, an accomplished attorney, an author, an educator, an explorer, a historian, a military leader (Brigadier General), a philosopher, a poet, and a translator.

A Boston native, Pike’s wanderlust led him to explore the South and follow the Santa Fe Trail. He had a particular fascination with Native Americans, and became a friend to several tribes, compiling personal dictionaries of their languages and dialects. Later in life, as an attorney, he became a legal advocate for Native Americans, trying to secure the rights which they had been promised by the government.

As with other “larger than life” vocal personalities, he was occasionally controversial. Strongly in favor of the Tenth Amendment (States rights) Pike, like many other Americans, sided with the South during the American Civil War. Although his wife’s family owned slaves he personally considered slavery a great evil, and the greatest calamity of the South. In 1856 he walked out of the Southern Convention saying, “he would suffer himself to be torn by wild horses before he would justify the renewal of the African slave trade.” He was ridiculed for his hope that a time would come for all men to be free, but he failed to condemn slavery outright. Following the war, under President Johnson’s amnesty proclamation, Pike returned to private life and in late 1869/early 1870 he moved with the Scottish Rite to reside in Washington, DC.

Pike has been quoted to say that he preferred to leave Freemasonry than sit in lodges with Black men. If this was his earlier view, he matured and changed. In fact, he became a supporter of Black Freemasonry and enjoyed a friendship with Thornton A. Jackson, Grand Commander of the Prince Hall Affiliation. Pike even shared his rituals with the Prince Hall Freemasons, and exchanged cordial and fraternal letters.

After Pike’s death he was maligned when it was falsely alleged that he had been a member of the KKK. Pike’s enemies claimed he was one of the founders and/or chief judicial officer of the KKK. However, when the US Congress investigated the KKK in 1871, its report failed to support these allegations. (Testimony Taken by the Joint Select Committee to Inquire into the Condition of Affairs in the Late Insurrectionary States, 13 vols. [Washington: Government Printing Office, 1872]). The allegations were so prevalent and persistent that even some Masonic writers were fooled and repeated them. However, there are no primary documents, membership records, or letters from Pike’s time which suggest his participation in any way. In the vast collection of the Supreme Council’s archives, there is not a single document connecting him with the KKK.

Another false claim is that Pike was a “Luciferian.” The French hoaxer Leo Taxil (Gabriel Jogand-Pages) asserted that Pike was the “Sovereign Pontiff of Universal Freemasonry,” and that he taught the worship of Lucifer in the Scottish Rite’s highest degrees. Taxil later publically admitted this was a hoax, at the expense of the Catholic church. Although Freemasonry admits good men of any faith, Pike was himself a Bible-believing Christian, who encouraged Masons to respect Jesus “Above all the other great teachers of morality and virtue” (Morals and Dogma 28:573). In several long passages, Pike implored Masons to follow Jesus’s example, calling him “the Great Master” whose life was an “undeniable Gospel” (M&D 28:575). Pike urged us, “Believe that there is a God; that He is our father; that He has a paternal interest in our welfare and improvement; that He has given us powers, by means of which we may escape from sin and ruin; that He has destined us to a future life of endless progress toward perfection and a knowledge of Himself—believe this, as every Mason should, and you can live calmly, endure patiently, labor resolutely, deny yourselves cheerfully, hope steadfastly, and be conquerors in the great struggle of life” (M&D 12:22). Throughout his writing Pike encouraged us to make the most of ourselves, to see ourselves as part of a human family, and to do good to all: “Learn, that you may be enabled to do good; and do so because it is right, finding in the act itself ample reward and recompense. To attain the truth, and to serve our fellows, our country, and mankind—this is the noblest destiny of man” (M&D 4:8-9).

Perhaps, however, his most famous saying is that famously engraved near his bust at the House of the Temple: “What we have done for ourselves alone dies with us; what we have done for others and the world remains and is immortal.” These wise words remain as true today, as when he spoke them.

Freemasons honor Albert Pike for the several reasons: for his love of a fraternity which seeks to improve the social order and encourages humankind to find commonalities to form bonds of friendship; for his willingness to discard personal prejudices when confronted by better information; and perhaps, most of all, for his love of the truth and commitment to share whatever truth he discovered.

Like the rest of us, Albert Pike was far from perfect. But he had the moral courage to abandon the past and move forward. He tried to make his personal weaknesses into strengths, and his writings encourage us to do the same. The remainder of his life was dedicated to a Fraternity that seeks to transcend barriers, both real and artificial, to make strangers into Brothers. This is why, when his statue was erected in Judiciary Square in 1901, it was attended by men who had previously faced each other on the battlefield.

Pike never wanted a statue of himself.

“When I am dead,I wish my monument to be built only in the hearts and memories of my Brethren of the Ancient and Accepted Scottish Rite, and my name to be remembered by them in every country, no matter what language men may speak there, where the light of the Ancient and Accepted Scottish Rite shall shine, and its oracles of Truth and Wisdom be reverently listened to.”

A Masonic Lodge upon the Moon?

Texas Lodge no.46 was opened at 10:00AM on the 2nd degree of Freemasonry, for the purpose of Examination, later to be called down to the first degree, for the conducting of regular business. Proficiency in the 2nd Degree Upon opening of the Lodge, Brother Charles Beylacq recapitulated a nearly perfect Fellowcraft Proficiency. A standing ovation […]

The Stated Meeting of Texas Lodge no.46 F&AM was held on the 2nd Saturday of the 12th day this Month of March, as it has been done since 1854. The Lodge was opened on the first degree of Masonry, at 10:10am The Officers… Raymond E. Hill IV PM sat in the East. Richard Bartlett PM […]